Last Sunday was the day of 40 birds in Lithuania, which means, according to traditional wisdom, that 40 species return from the South by that day. Some say that due to climate change the list of species changes, but their number remains roughly the same. I trust one of my favourite Lithuanian photographers, Marius Čepulis, for the species count. Meanwhile, I am trying to keep track of bird presence in Malta.

Birds in Malta do not get all the protection they deserve, bird-watching in spring is exciting in Malta, as various species pass by on the way to continental Europe, and, thanks to dedicated volunteers who monitor protected birds against hunting offenses, many survive the journey. 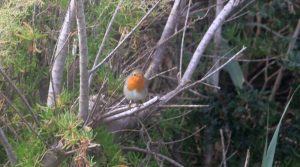 Robin is a common and brave bird. Click on the images to enlarge them

END_OF_DOCUMENT_TOKEN_TO_BE_REPLACED END_OF_DOCUMENT_TOKEN_TO_BE_REPLACED

I attended a debate in Marijampolė, the seventh-largest town in Lithuania, which was an occasion to visit this town for the first time. As a regional center of Lithuania’s historically most affluent region, Suvalkija, it continuously appeared in school textbooks. Many prominent writers and Lithuanian independence activists were from this region and had studied in Marijampolė. Still, I couldn′t have named any major landmark. It was not a part of the itinerary of high school trips either. Still, the town has a very interesting history and is worth exploring. END_OF_DOCUMENT_TOKEN_TO_BE_REPLACED

I love birds – as a child, I used to spend hours and hours studying bird encyclopedias and trying to recognize them as I see them. Birds used to be my favorite subjects for drawing, especially orioles, nightingales and pigeons. So a two-day stay in Ayutthaya, the ancient capital of Thailand, made me really regret I did not have a proper camera to take photos of all the interesting birds there. There is a huge park right in the center of the city, and birds there seem to really feel free to go about their business regardless of tourists. For identifying the species, I used Peter Ericsson′s very informative database of birds in Thailand.

Let′s start with water birds, of whom little egret is probably the most gracious. END_OF_DOCUMENT_TOKEN_TO_BE_REPLACED