I was among, apparently, around 170 people who signed up for a free tour by Nature Trust Malta to explore Babu valley (Wied Babu). When people sign up to an event on Facebook, one must divide the number by three and extract a square root to know the realistic number of attendees, but hiking tours in Malta are different. When people click they will attend, they actually show up and bring their friends. This is the scale of the ‘invasion’ in Wied Babu. The guides did their best that as many people as possible could hear the story they had prepared. So my friend and I heard about native and ‘imported’ vegetation and the special rocks that define Malta’s landscape.

Agave is an invasive species, which is now endemic in Malta.

Limestone gathers water, and its fragility allows plants to grow without proper soil. These yellow flowers make excellent homes for the yellow crab spider, which camouflages as a yellow flower to feast on pollinating insects, the guide told us. I was immediately curious – not just because Devendra Banhart, one of my favorite singers of the student years, has written a song about a little yellow spider:

Now I have a new mission – to see that spider in Malta. 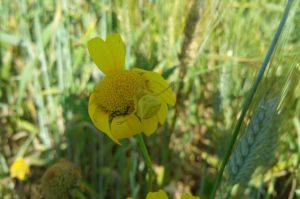 The guides also said we might see a hummingbird if we′re lucky, but a huge crowd as we were, we must have scared off not only hummingbirds but also spiders.

Descending into Wied Babu, however, was rather difficult. No wonder why some people go rock-climbing in the valley (we saw several). The description of the event on Facebook warned us that rocks might be slippery, but being short as I am, I had to crawl on all fours to climb them. Slippery surface wasn′t the point – they are just really steep. Some people brought their children and dogs, which left them pondering whether they should risk the journey at all or not. Some had to go home with some scratches and bruises. But those who made it were rewarded with beautiful views. After all this rock crawling it was a relief to end the hike in cute villages between the valley and Maqluba/Qrendi.