It’s a bit more than an hour since I returned from a lovely trip to Estonia, and I want to start from the freshest impressions. Those come from Tartu, the second largest city in Estonia. Tartu is known as a student city with a laid-back character. Everything is more or less within a walking distance, so Tartu people consider everything far if it can only be accessed with public transport. Tartu is biking-friendly, with many comfortable open spaces.

I was there for the first time in 2004, a couple of weeks after EU accession. Tartu people say that they didn’t have that many shopping malls back then, but I didn’t notice their dominance in the landscape. Back then Tartu students already had modern apartment-like dorms with comfortable Scandinavian designs. What struck us, the Lithuanian debating team in 2004, was the ridiculously low prices of alcohol. This was to invite as many Finns to party in Estonia as possible. Estonia was already the major destination for Finnish tourism.

Two famous objects are remembered by visitors in Tartu – the statue of a kissing couple and the bridge. It is said that every student has to do three things to be a real student: fail an exam, live in the dorm and walk over the top of the bridge. Is not as dangerous as it may seem at the first sight.

Apparently, the old Tartu University, which is pretty spread out around the city, is the biggest real estate owner and the biggest employer in Tartu (this I heard from my friend M., an excellent guide in Estonia). The University owns prestigious buildings in the city centre and many hospitals as well. You can see one maternity hospital on the first picture. Most of people who were born in Tartu started their lives there. Now it’s closed and will be reorganised into something else. 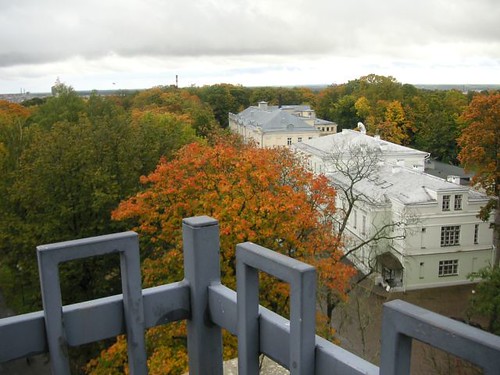 M. and I started our tour of Tartu from a monument to one famous poet, whose name I unfortunately forgot. The monument is close to the place which used to be the hospital for treatment of sexually transmitted diseases, so it was obviously not the favourite place for Tartu inhabitants to hang out. In the 90s the monument was only popular among Satanists, who would perform their rituals there.

Tartu is remarkable for small statues that block entry for cars into streets where parking is forbidden. Each year students of arts create these statues. 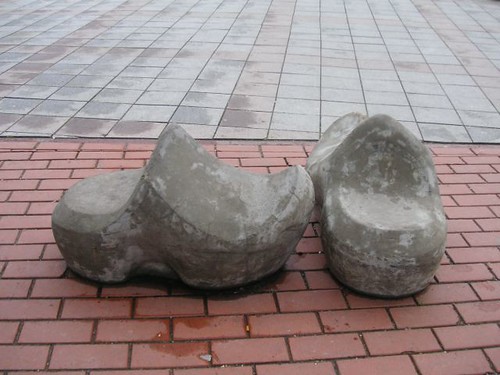 We further went to the castle, which is an interesting building with narrow staircases and nice platforms to view the city. 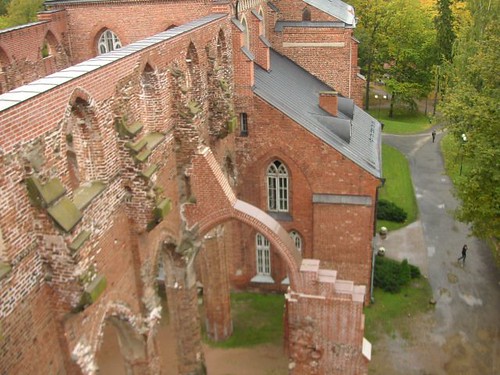 Apparently, a known poet is now employed to sell very cheap tickets to the castle. The view from the top of the castle is probably only nice in autumn, as there are so many trees and so few tall buildings that only several of them stand out from the greenery. One of them is a Catholic church, where the practicing parishioners are mainly Polish or Latin American.

As the rain starts threatening us, we run into ‘Rotund’, a cute cafe near the castle. As everywhere in Estonia, the place is proud of very tempting cakes. Tartu is proud of a variety of cafes for everyone’s taste. Some of them have trendy minimalistic designs, some try to stand out somehow. The ‘Noir’ has a fireplace in winters. ‘Pierre’ is proud of truffles and hot chocolate made in Aztec style (with sea salt). As you can see, copying French style is very fashionable in Tartu. We have lunch at a Georgian restaurant – another big thing in Estonia. They make this lovely green lemonade, and Tartu people say that the Georgian restaurant is better than in Tallinn.

Partying starts before you start to think of it, which of course should be expected in a student city. There are two main indie bars, more or less with similar audience. We chose ‘Plink Plonk’ in order to watch a show of a famous Estonian-Ukrainian band “Svjata vatra”. The band sings in both Estonian and Ukrainian, incorporates many folk elements of both groups. It’s a very good mix. Even though already Ruslana, the winner of the Eurovision song contest of 2006 or 2007, tried to do her best to ‘Balkanise’ Ukrainian music (i.e. prove that Ukrainian character of music is equally catching and could be liked by mainstream and indie music fans alike – certainly not the best example, but the most famous one), Ukrainian music in many countries is less known for these properties, as compared to, say, Serbian or Romanian. ‘Svjata vatra’ was great and set all the Estonian youngsters going wild. The singer, Ruslan, only lives in Estonia for a couple of years, but speaks fluent Estonian.

With everything so close, it’s easy to do club jumping in Tartu. Most parties end at ‘Zavood’, which is open until 5 am if I remember correctly. It is usually overcrowded and many people know each other. It is similar to ‘Vittula’ in Budapest for those to whom it rings a bell. Their choice of music is more or less no choice at all – from 80s to ‘taTu’ to heavier music. People are usually drunk enough to dance to anything. This place is frequented by the comparatively big Erasmus student community of Tartu.

Overall, my impression of Tartu didn’t change much since 2004. It’s a very lively and cosy student city. Some much bigger cities don’t feel that lively, and this one has the advantage of being small and accessible. Even the Khrushchev era buildings, notorious all across Eastern Europe for their dull looks, are somewhat cute in Tartu.