My acquaintance with Kiev starts much before we all start trying to delineate its limits through the window of our plane. It starts from the stewardesses with ‘Slavic’ style makeup – they won’t give us immigration cards until we ask them, since they don’t consider us foreigners. It also starts from pieces of hot chicken and lots of potatoes, which we receive in our lunchboxes on the plane. It starts from half-understandable (for us) signs in Ukrainian language.

The team that meets us do their best to ensure us that the next days will be interesting, purposeful and orderly – some Western European colleagues clearly doubt the latter point. A Swedish-speaking Finn jokes that the Ukrainians cannot tell a bus from a sauna. He will later have to pay (literally) for his impatience. Not willing to wait for instructions from our hosts, who will warn us about unreliable ATMs at the hotel lobby, he will later rage when one of these machines simply would not give him his cash.

The key-card must be used everywhere at the hotel – to enter your room to take an elevator, to turn on the lights… Some people don’t feel very comfortable when seeing policemen in corridors watching them. Later we will see that the guards do not cause any problem for girls in their shiny skimpy shorts.

And so finally here it is – the city! 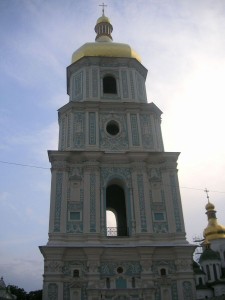 Kiev church – click on the images to enlarge them

The city of music: at the airport, in the elevator, in underground crossings – everywhere you are surrounded by sounds at once. There are speakers outside the hotel, but in the evening they will be replaced by the gently flowing “Strangers in the night” melody – live. The driver’s radio plays both Russian pop and oldies, the songs that hardly anyone listens to anymore, but everyone knows their lyrics by heart. As the midnight is approaching, a guy selling flowers in one of the tiny kiosks in an underground crossing is deep in his thoughts and listening to rap music. After breakfast you cannot miss piano melodies coming from the corridor. 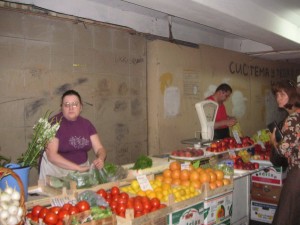 Market in an underground pedestrian crossing

The city of romantics: beside the Independence square, a guy in a suit is waiting for someone with a white rose in his hand. Couples, not paying attention to people passing by, are kissing in underground crossings. Not like the French, who are always going deep into each other’s throat, but as if they would be carefully studying each other shortly after having just met, and, having recognized their fatal passion from scents, colours or something else as in some magical TV commercial, they would not even consider that it is possible not to give in to it. Even posh Ukrainian girls, who are famous for this feature even in Lithuania, walk hand in hand not with guys in their training suits and not with rich foreigners. Dozens of people enjoy taking a stroll, sitting on benches, walking in a wide fountain, or sitting down right on a pavement, with a bottle of beer – it’s not forbidden. 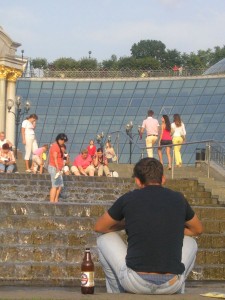 The city of colours – I see a small part of it through the window of my wine-, gold- and sand-coloured stripy spotty bedroom. The city of colours, which has a square where you can see two bright sky-blue Orthodox churches with golden roofs. The city which receives enough sunshine to make nail-polish shine on thousands of toes on every step. And shoes, abundance of them, – those that were fashionable in Lithuania a couple of years ago, the latest ones, soft and with little braids, sparkling flip-flops, fatal red, with heels high enough to remind strip dancers to some observers, white and multicoloured – whatever you fancy. Everyone in this diversity of colours wants to be colourful in her own way, and I’m starting to understand them. 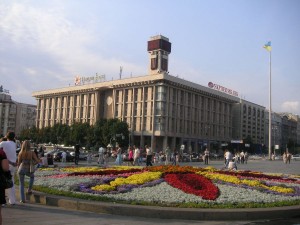 The city with a melancholic smile for the past – no one fears a pentagram in the city centre, and a statue of Lenin, concentrated and leaning forward, meets bypassers near one of the many underground crossings. 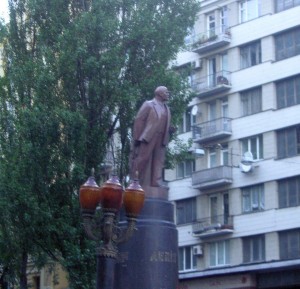 The conference hall at the hotel is filled with gentle tingaling of old chandeliers, and snacks at the headquarters of Ukrainian labour unions remind these times, when people were good at producing sophisticated meals from very limited variety of products.

For only 23.6 hryvnia (a bit more than 3 EUR) I get a small bowl of soup with pieces of sausage, cucumber salad, the main course of delicious dumplings, and a big mug of home-made kvass. 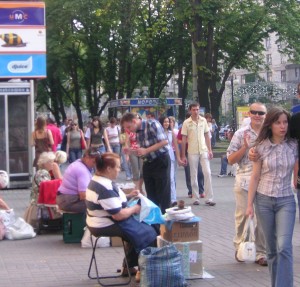 Many things can be bought on the street, including cigarettes – unpacked, sold one by one.

Western Europeans are surprised with everything they see in the Besarabian market, but not all of them. Me and the Danish colleague are discussing that it’s almost like in Gothenburg. 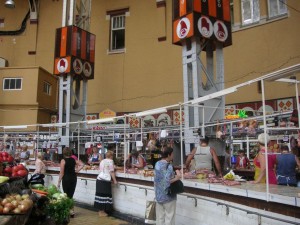 At first we doubt whether it is safe to return home at night, but only until we see that there are two guards in each underground crossing. At night I try to take a photo of the statue of Sholom Aleichem, but it appears so blur that it looks like a friendly waving ghost. Now I begin to wonder, was it real or was it a dream? 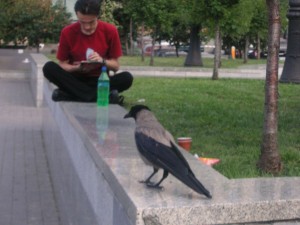