It’s great that many prominent freelancers are sharing their #FreelancePies – we certainly need to open up the conversation about money. In this post I’m not going to disclose my total income, but I’ll show you what freelancing was like for me since I left my last stable job. I’m doing this to contribute to helping people who aspire for a career in writing to plan realistically. Also, I’m going to show this post to friends and anyone who holds some romanticised impression of freelance journalism. Obviously, my experience doesn’t represent an average freelance journalist in any country. It’s just, well, a slice of the industry.

Pitching is one of the cornerstones of freelance journalism. It’s basically the door-to-door sales of journalistic writing, but virtually. To get a commission, we craft our best self in an email introduction and contact editors to offer a story idea. To write one, a freelancer must do preliminary research, and it is also expected that key interviews are pre-booked before pitching.

There are two main types of interviewees: experts and case studies. Experts are people who systematically follow a topic and deal with it professionally. Case studies are people who live with the issue at the heart of the topic. So, for example, in this story, farmers Regina, Gytis, and Janina, and business owner Aldona are ‘case studies’. They give a human touch to the story. As you can imagine, finding good case studies and booking experts before the story is even commissioned is time-consuming.

When editors see a freelancer’s idea and bio, they make a decision. 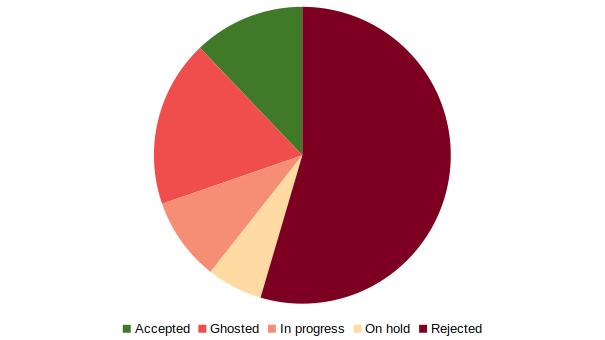 Being ghosted is the worst of all. Weeks pass, and there is still no news of it, but usually if there is no reply after a week, it means they are not interested. In this chart, my most recent pitches are still in progress, and a few pitches are on hold, which means the editor asked to come back with the same idea later.

The pandemic offered opportunities to attend various seminars and workshops online. I attended pitching workshops with the European Journalism Centre and Journalism.co.uk (the latter taught me to organise and track my pitches – a new habit thanks to which I was able to create the chart above). I also completed a Popular Science Writing course at the University of Cambridge, which covered pitching. Some pitches were developed during or immediately after these courses. I got feedback from tutors and peers and updated my pitches. Nonetheless, editors had different ideas. Thankfully, most were friendly and encouraging.

Why were these pitches rejected? Many times there was no detailed feedback or explanation. When there was, the editors said that similar stories were covered too recently, or the stories were too local, or they lacked stronger case studies. Most of my experience is in EU affairs, human rights and inequalities, and social issues, but this year I pitched many more health and science stories. The story I developed during the Popular Science Writing course accounts for a substantial chunk of these rejections – think I sent it to some 10 editors, and nobody wanted it.

Obviously, the hours spent on background reading and developing unsuccessful pitches are my loss – hours of work that remain unpaid. The only way I can recover these losses is to repackage unsuccessful pitches and sell them somewhere else. To do so, unless I have already been in touch with an editor I have in mind, I need to study the new target publication, read at least three articles in the section I’m aiming for, look up the commissioning editor on Twitter, see what their communication style is like, and rewrite the pitch (usually 1-2 paragraphs). 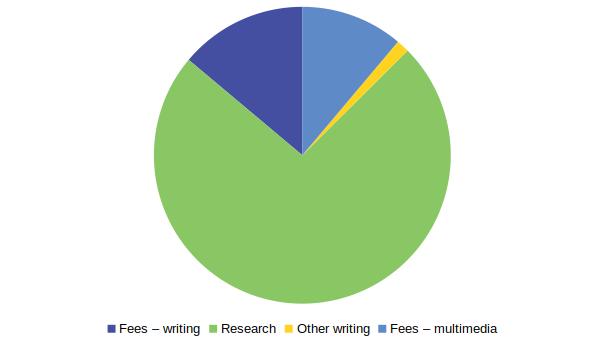 Thankfully, I’ve also had a research career, which has been helping me to put bread on the table for over a decade. Research is awesome – it pays well and usually everybody is very friendly in the process. Still, each time I tried to only do research it didn’t feel quite right, as I strongly prefer journalistic storytelling.

In a normal year the trend would be somewhat worrying. But since this is a year of no travel, no theatre, no gym and no spa, I am quite chilled about it. I wish all kind and helpful editors a wonderful holiday season!